Close X
Make an Enquiry
Make an Enquiry
Phone Us
Book a Test Drive
Value My Vehicle
Vantage Roadster A3 Ed. Introducing the Vantage Roadster A3 Ed. View Vehicles In Stock
We have offers across the range and we are here to help find the best offer for you. We can also tailor a finance solution for you and also organise your part exchange. Please contact us for more information on our great range of offers. Send an Enquiry

In 2021, the Aston Martin A3, celebrates its 100th birthday. The A3 was the third of five Aston Martin prototypes constructed before model production began. Now, it holds the proud title of the oldest surviving Aston Martin. The A3 was fitted with a 1.5 litre 11ph four cylinder side valve engine; making it a worthy opponent in the racing world. In fact, the car recently visited its home away from home; Brooklands Motor Circuit. Back in the day, the A3 impressively lapped Brooklands at 84.5mph in 1923. Now 100 years later, the Aston Martin A3 is the pride and joy of Aston Martin Heritage Trust's (AMHT) collection. The car has been restored to its original specification by the Trust and Ecurie Bertelli.

Production is limited to three cars. 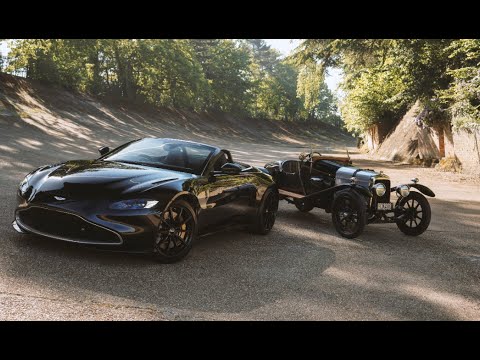 The mesh grille found on this Roadster A3 is completely bespoke to this Q-edition car. The mesh is surrounded by polished aluminium and filled with black lightweight mesh, echoing the historical aesthetics of the original A3. The bronze Aston Martin Heritage Badge placed carefully onto the grille adds a touch of elegance. The side gill is also heavily inspired by the original A3's exposed aluminium bonnet and leather bonnet strap. The No_3 engraved in the gill represents the stamping seen on the original model.

No_3 Etched Aluminium Polished Side Gill with Saddle Leather Strap

Inclusive of 5 Years Servicing Plan- Your Vantage Roadster A3 will be covered by a service plan which provides cover during the first 5 years, and ensures you can relax in the knowledge that your car is in safe hands.

*Finance example is for an Aston Martin Select agreement for a new Aston Martin Vantage V8 2dr Touchtronic Auto A3 Edition, with a contract mileage of 24,000 miles and excess mileage charge of 29.87p per mile (exc.VAT). Applies to vehicles ordered at participating HWM Aston Martin. Offer may be varied, withdrawn or extended at any time. Retail customers only. *On the road cash price is based on manufacturer’s recommended retail price and includes 3 year Warranty, 12 months’ road fund licence, vehicle first registration fee, delivery, and VAT. ^Optional final payment and option to purchase fee not payable if you opt to return the vehicle at the end of the agreement (vehicle condition, excess mileage and other charges may be payable). Finance available subject to credit acceptance to UK residents aged 18 or over. Guarantees and indemnities may be required. Terms and conditions apply. ‘Aston Martin Select Finance’ is a form of hire-purchase agreement provided by Aston Martin Financial Services and Alphera Financial Services, both trading names of BMW Financial Services (GB) Limited Summit ONE, Summit Avenue, Farnborough, Hampshire, GU14 0FB. H.W.M Limited T/A HWM Aston Martin is an appointed representative of ITC Compliance which is authorised and regulated by the Financial Conduct Authority (their registration number is 313486)

Free & Fast Online Part Exchange Valuations Interested in selling or part-exchanging? Use our tool to find out what your vehicle is worth. Value Now

Bespoke Mesh Grille Heritage This unique grille has polished aluminium surround and black lightweight mesh. Aston Martin's heritage badge takes pride of place in the centre of the grille.
Unique Side Gill NO_3 The side gill is fixed with a leather strap, inspired by the exposed aluminium bonnet and strap found on the original A3. The engraved N0_3 represents the original car's stamping.
Heritage Fluted Seats Chestnut Tan The Roadster has micro-perforated fluted seats. The Rear Cubby Lid is embroidered in Chestnut Tan, the same script used by Aston Martin in 1921
Vantage Roadster A3 Ed. Your Next Steps
Send an Enquiry
Book a Test Drive
Find a Dealer
View All Offers
Back to Top
© 2021 HWM New Zealand Avenue, Walton-on-Thames, United Kingdom, KT12 1AT Reg Office: Bridge Street, Walton – on – Thames, Surrey, KT12 1AT Reg. Company Number: 6794068 VAT Reg. No. 211541514
CREDIT PROVIDERS H.W.M. Limited T/A HWM Aston Martin is an appointed representative of ITC Compliance Limited which is authorised and regulated by the Financial Conduct Authority (their registration number is 313486). Permitted activities include advising on and arranging general insurance contracts and acting as a credit broker not a lender. We can introduce you to a limited number of finance providers. We do not charge fees for our Consumer Credit services. We may receive a payment(s) or other benefits from finance providers should you decide to enter into an agreement with them, typically either a fixed fee or a fixed percentage of the amount you borrow. The payment we receive may vary between finance providers and product types. The payment received does not impact the finance rate offered. All finance applications are subject to status, terms and conditions apply, UK residents only, 18’s or over, Guarantees may be required.
GET IN TOUCH If you would like to discuss your experience at any of our dealerships then please feel free to contact us. Contact Us
HWM on Social Platforms:
Back
Book A Service
Vehicle Valuation
Compare Saved Vehicles
Top
Close
X